LEUVEN/BERINGEN/AARSCHOT – The city of Leuven, in collaboration with the local police, is to donate lost items with low resale value to good causes where their owners cannot be found. On behalf of Natuurpunt, the environmental company Out Of Use, originally from Aarschot, has already picked up hundreds of lost mobile phones and tablets from the police station in Leuven. Buggies, laundry baskets full of clothes, a drill, bicycles, mobile phones, tablets, laptops, jumper cables, pruning shears, bicycle locks, a sink tap and a skateboard. There is an endless list of lost property whose rightful owner can’t be found by the police after six months.

Elektronica
Until quite recently, the reusable items were sold publicly through a bailiff and the rubbish went into the incinerator. Because some of the saleable items fetch almost nothing, and faced with mounting handling costs, the city of Leuven and the police decided to donate the goods to four charities in future: Poverello (clothing +12 years old), Kirikou (baby and children's stuff), MAAKbar (tools) and an electronics collaboration between Natuurpunt, Natagora and the environmental company Out Of Use, originally from Aarschot.

Extra bos
On Thursday, four tubs filled with all kinds of electronics were waiting for the representative of Out Of Use. "First, we look at whether the donated mobile phones, laptops and tablets are still reusable," explains Yannick Adriaenssens, COO at Out of Use. “If so, these devices can be re-marketed. If the devices can’t be used again, they are processed into raw materials which can be used to make new devices. It's a circular story, but it is even better knowing that we have a structural partnership with Natuurpunt (Flanders) and Natagora (Wallonia). We have an agreement that 4 m2 of woodland will be purchased for each working device donated. If the device doesn’t work, it’s just one m2. So the greater the value of the device, the more woodland can be bought. So far this collaboration has yielded about 30 000 m2 of extra woodland.”

Out Of Use
Along with the processing (reuse or recycling into secondary raw materials) of B2B e-waste, Out Of Use is also active in the processing of airbags and the recovery of electric batteries from vehicles. The subsidiary Circular Brussels, on behalf of Out Of Use, is looking for outlets in the social sector (schools, poverty organisations). Customers wishing to donate materials to social causes can do so through Circular Brussels, but Out Of Use will also help social causes selected by the customer. Out Of Use's portfolio includes the National Bank and NATO. On behalf of these organisations, Out Of Use dismantles server rooms with data racks, and an important part of this task is data wiping. Currently based in Beringen, Out of Use has a staff of 15. For dismantling, the company uses sheltered workshops and other organisations such as the prison service. 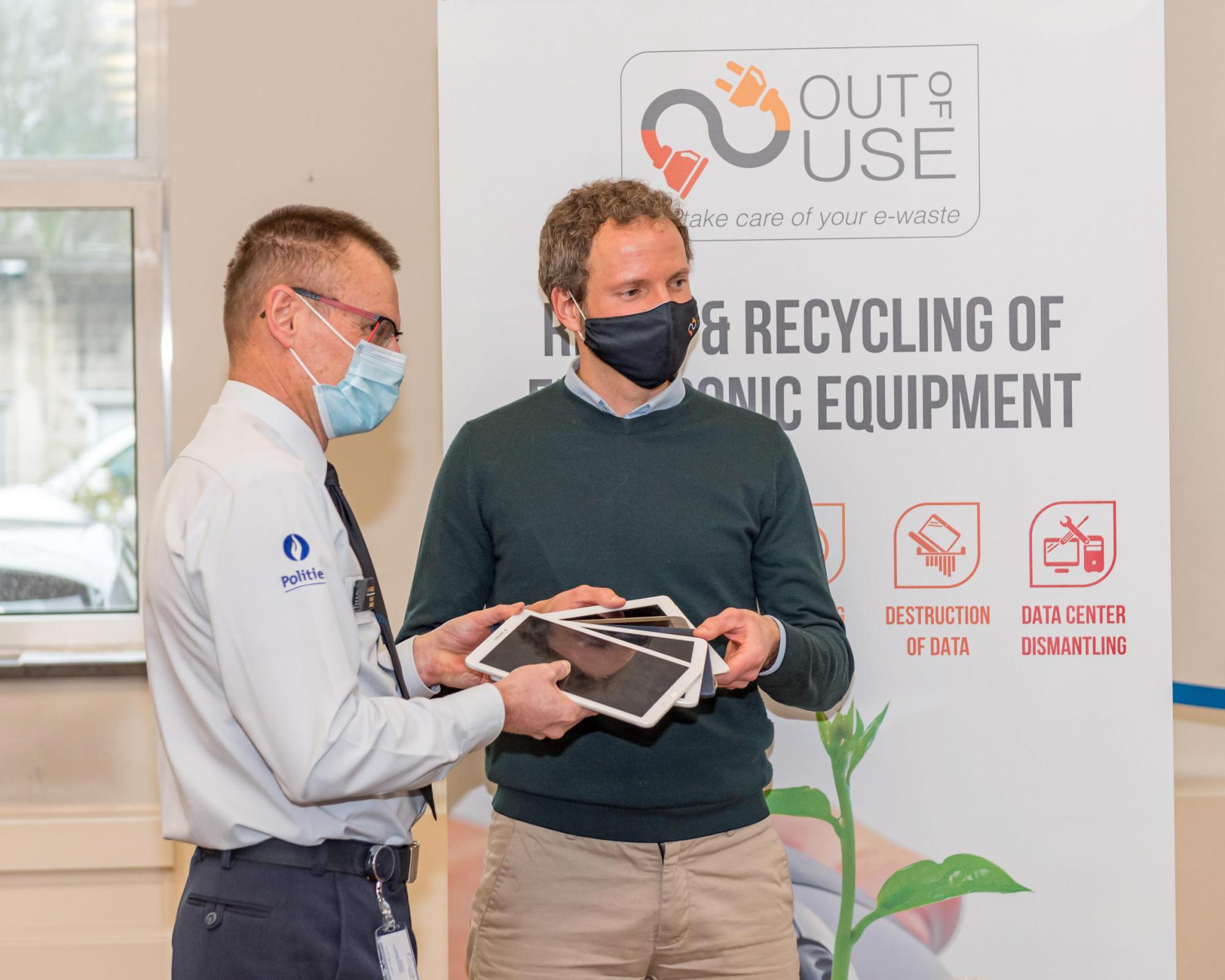 Stay up to date

Subscribe and receive our latest news in your mailbox.

The importance of data destruction for any organisation

4 tips for reducing your CO2 emissions as a business

Environmental company Out of Use breaks world record domino with laptops